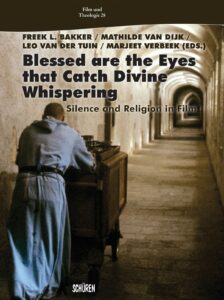 Blessed are the Eyes that Catch Divine Whispering

Silence and Religion in Film

Many films include moments of silence. Sometimes these moments last little longer than one or two seconds. In the past there were so-called ‹silent films›; however, when these were screened, they were mostly not silent. They were accompanied by music or, from time to time, by a voice pronouncing the sentences that were projected. There are also modern silent films, such as INTO GREAT SILENCE (Philip Gröning, 2005). In fact, the audience hears the sounds the people in the monastery make, but since it is a convent where the monks do not speak and live in an extremely silent atmosphere, the film is dominated by a deeply felt stillness.

Yet, as a sound director said, it is never really silent in film. Therefore it is very interesting to explore what silence in film really is. Is it about sound only? Or, is it also about images? Various religious texts, including 1 Kings 19: 11-12, suggest that silence is something coming from God. In this Bible passage Elijah hears a hovering silence and then he knows that God is present.

Some writers in this volume will explain that silence has various meanings. One can speak about repressive silence, transforming silence, ominous silence, transcending silence, mystic silence and many other forms of silence. This volume first pays attention to the phenomenon of silence itself in film and subsequently to silence a more figurative sense. Although it also pays attention to what is called visual silence, the silence evoked by images, it joins in with a new trend in the study of film and religion, namely to give heed to sound as well.